By: Steve Mann and Chris Aimone

Traditional (analog, optical) eyeglasses modify light by refraction, whereas the next generation of eyeglasses, called "EyeTap" devices, modify light computationally. In the future, instead of having to get new lenses ground, our eyeglass prescriptions will be downloaded over the Internet.

These "digital" eyeglasses will provide users with many enhacements over traditional eyewear.

Traditional lense technology has allowed various optical disorders to be corrected and has allowed some of our visual abilities to be extended. Sunglasses and welging glasses allow us to see very bright scenes. Magnifying lenses such as a jeweler might use, allow us to see very small objects. More recently, advanced devices have been made to allow us to see in the dark although they are often bulky and dangerous to wear in situations where there is a possibility of bright lights in the environment.

In contrast, EyeTap digital eyeglasses merge all of these different visual aids into a single device, and is consequently able to perform in situations where each one of these aids used alone will not suffice. Consider driving on a country road at night. In this scenerio, one may benefit from using night-vision technology, however the headlights on an occasional oncomming could be blinding. The use of an EyeTap device would allow the user to see in the dark without the danger of being blinded by the occasional flash of light. Also, for those who suffer from more complicated visual deficiencies, they allow for the use of computational methods to correct the problem.

The more important features of EyeTap devices however, have no analog in traditional eyewear. These digital eyeglasses can help us remember better, through what is called a lifeglog (lifelong cyborglog) or 'glog, for short. A 'glog uses lifelong video capture to record what our eyes see over our entire lifetime. By using the data management capabilities of modern computers, we will be able to recall things that we have seen with perfect clarity in a natural and intuitive way. Having an on-demand photographic memory can help all of us by offloading the task of memorizing semi-important details onto a tireless machine. This would be very beneficial to all of us, since our environments have become so overloaded with information. This lifeglog can also be used to increase personal safety and crime reduction by providing visual evidence for criminal acts, and to allow for trusted third party surveillance in situations where the user may feel threatened.

EyeTap devices can also take an active role in helping us to filter our visual world for salient information. Imagine a world without advertisements! By using advanced computational methods, these electronic eyeglasses have been used to remove the annoying visual propoganda that plagues our urban environments.

Since EyeTap devices can function as a computer display, it allows users to merge cyberspace with the real world. This feature is tremendously important since we are becoming increasingly bound to our computers due to our reliance on the internet as both an information and a social resource. As long as we need to focus our attention on a single physical object (such as a computer terminal, PDA or cellular phone), we will only feel more encumbered by computer and telecommunication technology as time passes.

History of the EyeTap Device

Since the 1970s Steve Mann has been inventing, designing, building, and wearing computer systems for the creation of electronically mediated environments.

Among the interesting discoveries found in long-term adaptation to computer-mediated reality was a new way of seeing. Because of the constant view of the world from a photographic perspective, the EyeTap became a way of blurring the boundary between cyberspace and the real world, and appreciating the range of light and shade in everyday life. Throughout the early 1980s, this led Mann toward a new kind of visual art based on seeing how everyday scenes and objects responded to light, as shown below: 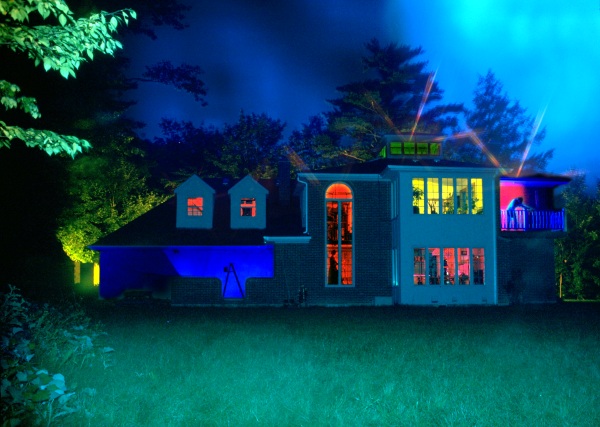 In the above image we see computer mediated reality as a form of visual art, from the Summer of 1984. The computer-mediated view of the world forms the basis of a new genre of visual art.

The evolution of his invention for seeing everyday spaces in a different light, is shown below:

In addition to enabling better eyesight, as well as facilitaing new genres of visual art, EyeTap devices can help solve the energy crisis.

Such eyeglasses can also save electricity, by allowing us to see in complete darkness. This reduces the need for electric light, and is therefore one possible solution to help with the energy crisis.

Here is a diagram showing how the eyeglasses work: Driven by a personal desire to explore new ways of seeing, but through the use of computation rather than optics, Mann has been inventing, designing, building, and the last 25 years of wearing computerized reality mediators in everyday life has provided insight into some of the issues that would not normally have been discovered in a controlled lab setting. These issues include not only the long-term effects of such devices, but also some sociological and humanistic factors such as how others react to such devices [Mann with Niedzviecki 2001].

For example, the adverse reaction by others had initially given rise to a the author's desire to build (and the author's success at building) reality mediators that do not have an unusual appearance, as in the Late 1990s. The earlier designs are now mainly used mainly for teaching purposes, but have also been show at such venues as Museum of Modern Art (MoMA) in New York, the Smithsonian Institute, National Museum of American History, in Washington D.C., and the Science Museum in the U.K..

This version of the invention, now being shown at the Smithsonian, is particularly illustrative as an early example of the technology, and why miniaturization is so essential: 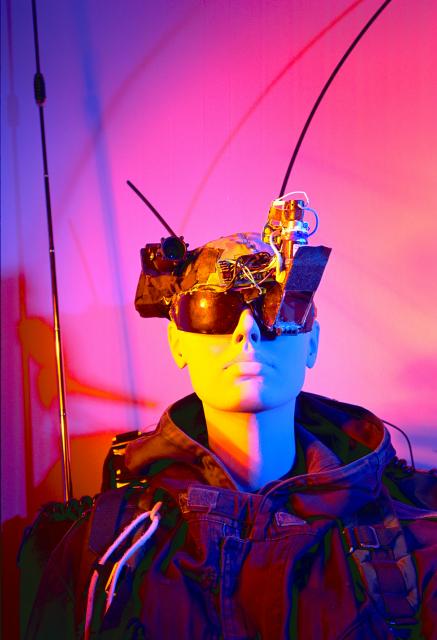 The drive to miniaturization led Mann to create, in 1995, devices having a completely normal appearance.

However, subsequent realization that covertness stigmatizes the activity, has us to no longer see covertness as essential.

In view of such a concealment opportunity, Mann envisioned a new kind of eyeglass design in which the frames come right through the center of the visual field. With materials and assistance provided by Rapp optical, eyeglass frames were assembled using standard photochromic prescription lenses drilled in two places on the left eye, and four places on the right eye, to accommodate a break in the eyeglass frame along the right eye (the right lens being held on with two miniature bolts on either side of the break). Mann then bonded fiber optic bundles concealed by the frames, to locate the camera and aremac in back of the device.

This research prototype proves the viability of using eyeglass frames as a mediating element. The frames being slender enough (e.g. two millimeters wide) do not appreciably interfere with normal vision, being close enough to the eye to be out of focus.

This brings about a reversal of the roles of eyeglass frames and eyeglass lenses, in which the eyeglass lenses are a decorative design element, whereas the frames are what enables the seeing.

When you first look at this design, you probably think that the frames block the vision, but for the fact that they are so thin. But even if the frames were wider, they can be made out of a see-through material, or they can be seen through by way of the illusory transparency afforded by the EyeTap principle [Mann 2001]. Therefore, there is definite merit in seeing the world trough eyeglass frames; the frames not block vision because of illusory transparency, because they are computationally transparent as part of the compuational process of seeing. To understand this concept, see for example the picture shown below: 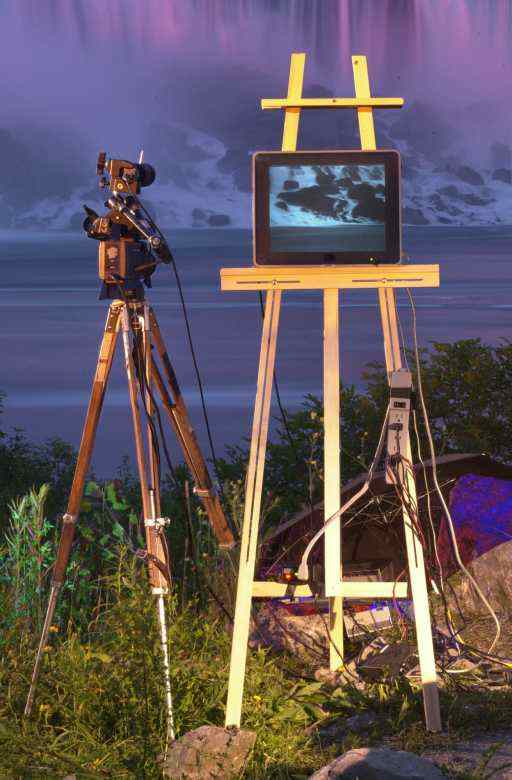 Moreover, the long-term adaptation to seeing through the device provides a unique opportunity to capture, process, store, and recall visual memories. Unlike a mere wearable camera, the EyeTap, because it becomes a manner of seeing, captures exactly what the bearer does see. This results in a new kind of EyeTap cinematographic vision, which involves long-term adaptation to the new way of seeing.

One aspect of the new way of seeing involves learning to see in image-stabilized coordinates, in which a new kind of photographic vision emerges, as shown below:

This gives rise to computer mediated reality as a new way of seeing: longterm adaptation to stabilized image coordinates results in a unique photographic vision of the world.

Moreover, a living and permanently installed/instilled photographic perspective allows the bearer to capture the birth of a newborn, or to capture baby's first steps, as shown below: 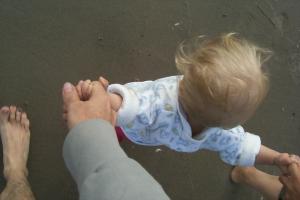 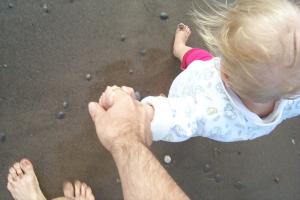 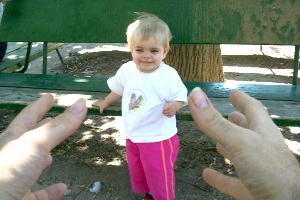 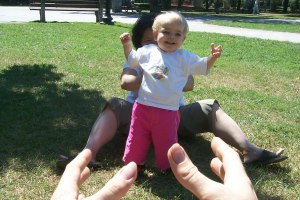 The birth of a newborn (Christina Mann, as documented in Christina's 'glog, http://christinamann.com), and a little over a year later, Baby's First Steps, captured by way of longterm adaptation to stabilized image coordinates.

Presently Mann is working with his graduate student, Chris Aimone, as well as with other students, on further research into seeing aids and computer vision systems.

In this article, we show some of our designs, for electric eyeglasses. All of them are real working systems, that function as seeing aids, visual memory aids, and wearable camera phones, helping us stay connected with our loved ones, helping us remember our lives, and helping improve our safety.

Aimone and Mann succeeded in designing an injection moulded EyeTap suitable for mass production, as shown below: 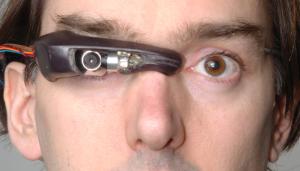 This was based on an earlier prototype first made in aluminum:

After wearing the EyeTap for a number of years, we adapt to seeing the world that way, and this provides a new kind of personal experience capture, in day-to-day life. The hands-free nature of the EyeTap therefore helps document personal interaction.

Here is an example of cyborglogging (also known as a 'glogging). A 'glog is a recording of an activity made by a participant in the activity. Here father and daughter collaborate in the assembly of structural pipe fittings ("rigging") as an example of the use of the EyeTap for 'glogging, and the generation of a family album: